Bear Garage is a building separated from the family home. It is constructed in order to house the selected cars and the beloved collectable items, mainly Be@rbrick toys. Onion worked on the project twice. In 2013, the brief was to design a cabinet to display at least 70 Be@rbricks. Onion designed Bear Cabinet 1 with the idea of dimensions. Be@rbricks of the same dimension appeared to be different in size when on display in the cabinet. They seem gradually smaller until the size was reduced by half at the corner of the space. The techniques were to customise each shelf, to make it wider and further apart, and to draw a perspective of a room on the rear wall. A best viewpoint to perceive this illusion is at the centre of the Garage where one can observe the cabinet’s elevation.

The collection has expanded from then on. In 2016, Onion renovates Bear Garage’s facade by using Aluminum Carbon Fiber Decoration Sheets in silver colour. A golden sculpture of a Thai artist named Alex Face is placed on the stepped lawn, next to the Garage’s entry. Its shadow on the facade is bigger than the sculpture actually is. For the interior, the requirement is to create Bear Cabinet 2 that can house as many Be@rbrick as possible in a limited area of 2.7×5.6 square meters.

Upon entering the Garage, the sideview of Bear Cabinet 2 displays only the back of a four feet tall sculpture, entitled “Kaws Passing Through”, sitting on a stainless steel plinth. The entire cabinet has to be observed at a turn from that sideview. Be@rbrick toys are thought of as an army marching on the ramps and through Bear Carbinet 2 itself. This spatial effect is created by twisting angles of the cabinet’s surfaces and positioning of looking glasses. A good viewpoint to observe this march is between Bear Cabinet 2 and the living room, where Onion also design built-in cabinets. In addition to “Kaws Passing Through”, Onion successfully display fifty-one 1000% Be@rbrick and two 400% Be@rbrick in Bear Cabinet 2.

Be@rbrick cabinets transform the space of Bear Garage. Cabinet’s surfaces that fold in various angles give shades to the Garage ceiling. Its steep slope extends itself from the inside to the outside of the cabinets. This darker shade of grey leads the gaze to a brighter space, that is Be@rbrick window display. Collectable toys become the luxurious items, orderly arranged, lively and playful. 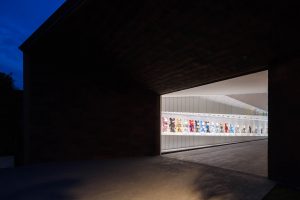 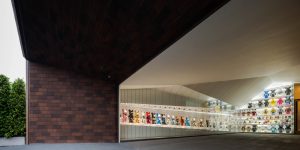 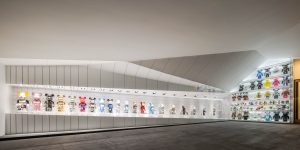 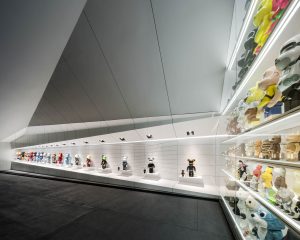 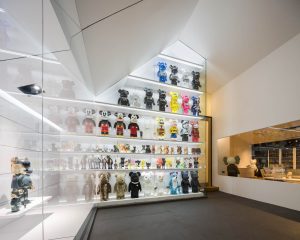 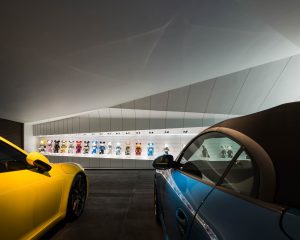 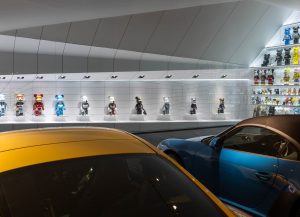 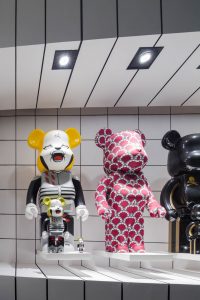 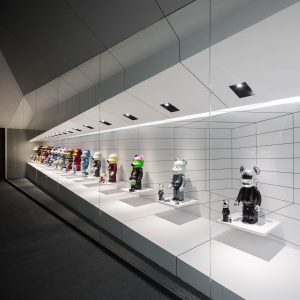 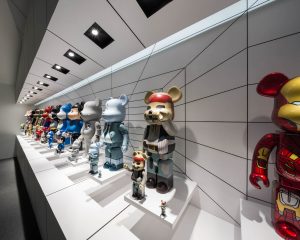 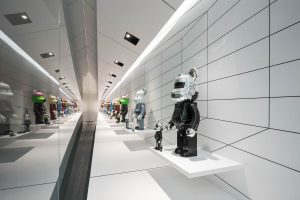 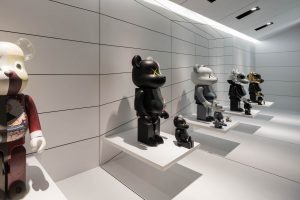 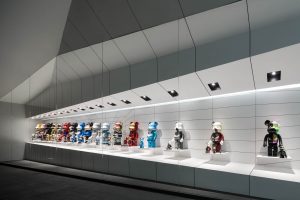 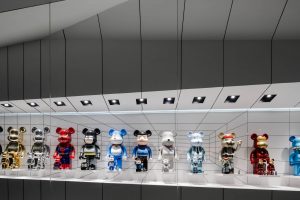 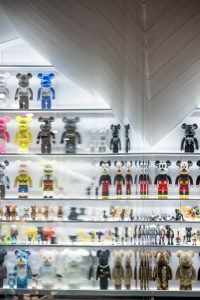 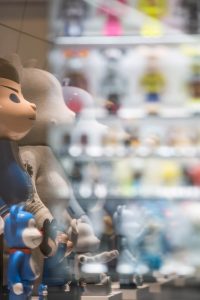